NYT: the ball is in John Roberts’s court 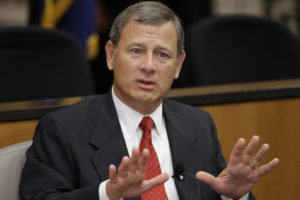 On Thursday, in the Senate, neither party distinguished itself. In a cry of rage against the Republicans’ nihilistic refusal in 2016 to grant even a hearing to Barack Obama’s last nominee to the court, Democrats filibustered to block Neil Gorsuch, President Trump’s nominee to that stolen Supreme Court seat. They accomplished nothing. The Republicans immediately voted to change the chamber’s rules, killing the filibuster in order to grant Judge Gorsuch an up-or-down vote. That removed the filibuster as a hurdle to all future Supreme Court nominees and, in the process, destroyed what had been a unique feature of the Senate that guaranteed broad-based support for appointees to the highest court in the land.

This failure of vision from Senate leaders of both parties has now led the nation to a place where the fate of all Supreme Court nominees depends entirely on which party has a majority in the Senate. Provided their party controls that majority, presidents no longer will feel much need to select a moderate, impartial jurist — indeed, the politics of their base will push them, as it did Mr. Trump, in the opposite direction. If this situation stands — and there’s no expectation it won’t — it could shake the court system and the integrity of American jurisprudence to its core.

I agree about the damage done and danger posed, but not on the blame. The Democrats’ filibuster was made necessary by Mitch McConnell’s refusal to give consideration to Obama nominee Merrick Garland, a widely respected centrist choice who had been praised on both sides of the aisle, including by Sen. Orrin Hatch, prior to his selection by Obama. The reflexive opposition to anyone or anything embraced by Obama is known as blacklash, a term coined by Bill Maher. Blacklash is a deeply irrational phenomenon that continues to poison both our domestic politics and our international relations. In aggressively trying to erase every trace of Obama’s presidency, Trump is only carrying forward the policy and practice of Sen. McConnell.

It makes no sense to criticize the abolition of the filibuster for presidential SCOTUS nominees while faulting Democrats for using it. If the Democrats are to be faulted for anything, it should be for confusing moderation on policy with half-heartedness in fighting the far right.

[The destruction of bipartisan compromise] dramatically raises the stakes for Chief Justice Roberts, and his early praise for justices “willing to put the good of the court above their own ideological agendas.” Since he uttered those words, he has led his majority to 5-4 decisions that serve narrow conservative interests. If he continues along that factional path, the responsibility for corrosion of the rule of law will be his.