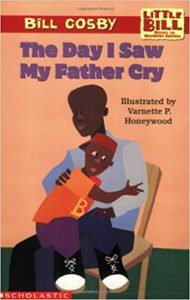 Bill Cosby’s “Little Bill” children’s book series was among the 10 “most challenged” books in 2016, according to a list compiled by the American Library Association’s Office for Intellectual Freedom….

It’s the first time the Cosby series has attracted a complaint, the organization said. The “Little Bill” books, first published in 1997, tell the adventures of Bill Jr., a 5-year-old Philadelphia boy, and were the basis for an animated TV series.

The series’ appearance on the list is unusual because it’s the first time since the office started to compile data in 1990 that a book made the list because of its author, rather than its contents.

Why is this necessary? The man is disgraced. He is on trial. (And I believe his accusers.) His good works do not have to be erased. He also made large donations to Morehouse and Spelman, and he and wife Camille donated artifacts to the “Blacksonian.” Do those now need to be returned? Hell no. I will not go along with this Old Testament mentality. We cannot do justice to one wrong (or 54) by committing another.