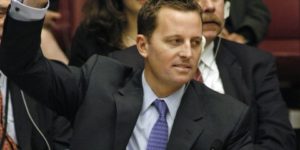 Jonathan Merritt writes in The Atlantic that President* Trump is reportedly considering naming gay conservative Richard Grenell as his ambassador to NATO. Interestingly, many anti-gay evangelical Christians are not squawking about it, as they did in 2012 when Grenell was a foreign policy advisor to Mitt Romney.

I myself wrote about Grenell in May 2012 in a column titled “Servants of Misrule,” the day after President Obama endorsed marriage equality. I think it holds up quite well. It is not easy to excerpt, but here is a bit of it:

Grenell’s tweets insulting everyone from Michelle Obama to Rachel Maddow are not my main problem with him, any more than they are for Bryan Fischer of the American Family Association. My concern as an activist is more about policy than personalities. Bigots like Fischer cannot see past Grenell’s gayness. I see little sign that Grenell’s gayness influences his politics at all.

If this appointment is made and goes through, it may help normalize gays within conservative circles. That, however, may require gay appointees to abandon pro-LGBT policies. Those who slam identity politics, from Bernie Sanders on the left to Andrew Sullivan on the right, might want to reflect on whether it is really an improvement to keep the identity piece while losing the related policy considerations.

That may seem an easy answer if you didn’t care about non-discrimination policies to begin with (Grenell, for example, supports anti-LGBT laws disguised under the label “religious freedom”); but those in power always want to have (or talk as if they have) the public unified behind them. With a population as diverse as ours, it is hard to have real unity while supporting discriminatory public policies. Equal protection of the law is a constitutional guarantee, not just a liberal campaign platform. The GOP will face a harsh reckoning down the road if it ignores this.