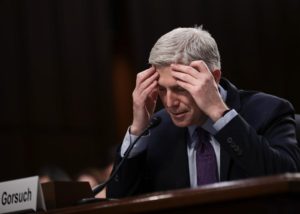 Judge Neil Gorsuch appears to have copied portions of another author’s work in several paragraphs of his 2006 book opposing assisted suicide.

Buzzfeed’s Chris Geidner was the first to report that a “short section in Judge Neil Gorsuch’s 2006 book appears to copy — at times word-for-word — from a 1984 law review article by a lawyer in Indiana. Other sections of his book that were reviewed by BuzzFeed News contain additional apparent attribution errors.” …

The White House is denying this is plagiarism.

Of course the White House is denying it and crying foul. But the evidence is clear. Gorsuch committed plagiarism. But what’s a little plagiarism among thieves? That is what the Republicans are at this point. If ya don’t wanna be called on it, stop doing it.