The worsening plight of LGBT refugees in Kenya 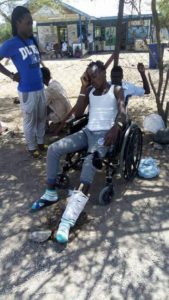 The situation is worsening for LGBT Ugandan refugees in Kenya, as reported by Erasing 76 Crimes on May 11:

Response to this humanitarian crisis has fallen largely to a network of concerned activists around the globe. One such is Richard de Luchi, a British citizen living in Lisbon, who wrote the following this morning:

Good morning from me in Lisbon,

I understand that the 18 lgbtiq who were arrested in Nairobi last week have now been taken into custody by the Kenya police at the camp. I am informed that this was following protests by these persons of concern at conditions and treatment.

Do we need to be reminded that these people are refugees, not criminals, and that they should be under the protective care of UNHCR. I have been told that once in police custody, a person has no connection with the outside world via mobile phone. I am ignorant of the legal process regarding arrest and detainment in Kenya, but trust that these persons of concern are accessible by humanitarian organisations. If not, then something is seriously wrong, especially since one of these persons was badly beaten by police last week: see the attached photograph. Who knows now how many more have received the same brutal, unchecked treatment.

The purpose of this email, apart from registering my protest at the whole turn of events, is to urge anyone and everyone to use their influence or power of words to get these 18 individuals out of Kakuma and into some form of safe housing where their resettlement processes may be dealt with in a calm and civilised manner. The image of Kenya before the world is not a good one, and I feel that it is high time that the country live up to international standards of treatment of citizens both national and those who are there simply because of UNHCR.

There but for the grace of God go I is a saying that should be quoted more often in a world where the human race is in danger of losing its capacity for compassion.

Once again, pressure at the highest level in government and diplomacy is called for.

I am writing to you about the fast deteriorating situation regarding LGBTIQ asylum seekers and refugees in Kenya.

For some months now I have been in contact with individual persons of concern and they all report the same problems with their situation in the country. The refugees are for the most part Ugandans, but also from neighbouring countries with equally draconian laws and attitudes towards gay people. May I assume that you are familiar with the level of danger and insecurity that gay people suffer across the African continent. If you require answers to questions, then either I or one of my contacts in kenya should be able to answer them.

All my contacts tell of:

I should be personally most grateful if you could give this email your most serious attention. The current situation in Kenya is dire, and is bound to get worse since the country is coming up to elections. Somehow Kenya has to be made to realise that its policies are inimical to the world of the 21st century as we would like to see it. I am preaching to the converted, so shall leave it there.

I (Rick Rosendall in Washington, D.C.) am in contact with two gay Ugandan refugees in Kenya, who were not among the 18 sent to Kakuma. They are in fear and are hopeful that increased international attention will help. You can use this contact info for the American ambassador to urge him to weigh in with the Kenyan government and UNHCR on behalf of the refugees:

Many individuals raising our voices can grow into a chorus. The least we can do is try. Silence equals death.