Chelsea Manning Returns as Herself 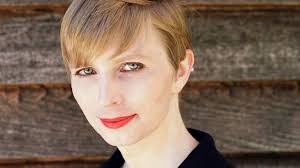 Army Pvt. Chelsea Manning is revealing her new look as a woman, after being freed from a Kansas military prison and a 35-year sentence for leaking classified materials….

Manning was released early Wednesday from confinement at Kansas’ Fort Leavenworth, after having served seven years behind bars for giving classified materials to anti-secrecy website WikiLeaks.

Manning and her attorneys have refused to divulge her post-prison whereabouts or immediate plans.

I have been critical of Manning for her violation of the Espionage Act, in which she recklessly leaked hundreds of thousands of documents, far more than she could possibly have reviewed with care. But President Obama commuted her sentence in an act of compassion, and she deserves a chance to put her life back together. She is finally free to control her gender expression without jailors as intermediaries. She looks great. Good for her.

As for her critics, all too many have confused her gender identity with the acts for which she was convicted. They have deliberately misgendered her. They have substituted their own uninformed judgments for those of her doctors. They have taken for granted the monstrous notion that withholding medical care is an appropriate and acceptable form of punishment. It is neither.

Her notoriety has placed her at the center of a national learning curve that few would envy. The public’s education on the rights of transgender citizens is far from over. I myself have had debates on the radio with transphobic callers whose hatred was shocking and disturbing. Such attitudes cannot be taken lightly given the often murderous hate violance to which trans people are subjected.

So let us respect Ms. Manning’s privacy as she adjusts to her new life. She has served a significant sentence for her crime, on top of which her treatment in military prison was deplorable, as that of trans prisoners all too often is. Let us wish her well as we continue the struggle for equality. It is time for healing and understanding.