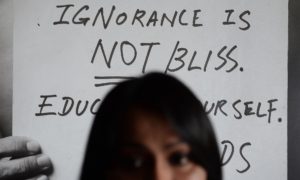 The Malaysian government is offering cash prizes of up to 4,000 ringgit (£720) for the best videos explaining how to “prevent” homosexuality, according to a competition launched on the health ministry’s website.

Activists said the move would further spread fear among Malaysia’s LGBT community, as conservative attitudes chip away at the Muslim-majority nation’s one-time reputation for moderation and tolerance.

Contestants are invited to submit a video clip addressing various categories including “gayness” or “gender confusion”, and offering suggestions as to how these could be “prevented or controlled”.

I have an old flame who lives in Malaysia. He is one of the sweetest, most generous, and most thoughtful people I have ever known. But he was taught by his Muslim religious teachers that homosexuality was an abomination. He believed them. The result was that he was miserable. He prays five times a day. He thinks he is going to hell. But he has never stopped being gay. One of the saddest things in my life was not being able to persuade him to accept himself, to love himself. You can try your level best, but at the end of the day, you cannot make another person’s decisions for him.

I have a prediction: whoever wins Malaysia’s gay prevention contest, and whatever brilliant solution they devise, it will not work any better than the conversion therapy touted in America by anti-gay Christians. It may make a lot of people’s lives more unhappy, but they will still be gay.

I still love you, my friend. I am sorry beyond words that I could not rescue you from the clutches of those who taught you to hate yourself. Once you whispered in anguish, “You made me sin.” I declared then and there that I took full responsibility, that you should send the authorities to me because I wanted to have words with them. If need be I will shake my fist at the sky and say, “Turn me to ashes, you bastard!” But, my dear, there is no anti-gay spirit up there. There is only terrible folly taught by mortals to frighten and control other mortals. Still you are a beautiful and loving man, and you deserve the same happiness that others know. But the world keeps spinning, and we are twenty-seven years older. I did not make love to you enough. Yet I remember the night we spent together, when you arose before dawn and put on your kufi prayer cap and unrolled your prayer rug and said your first prayers of the day. Then you put away the kufi and prayer rug and returned to bed with the one who loved you, who told you that your love was not a sin, words you never found the strength to heed.