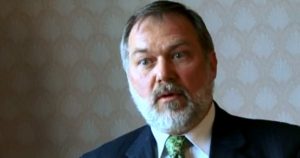 Massachusetts hate preacher Scott Lively is one of the world’s most notorious homophobes, and has been linked to anti-gay laws in a number of countries.

Lively addressed an anti-gay conference in Uganda just before the country’s homophobic law was drafted, where he urged a fresh crackdown on gay sex. He also cheered on anti-gay legislation in Russia.

The pastor has extensive links to anti-LGBT movements across the world, particularly in deprived countries. Human rights activists allege is key to a wave of anti-LGBT laws and resistance to the repeal of sodomy laws around the world.

Lively had faced a crimes against humanity lawsuit from Ugandan LGBT activists, who allege he has acted in violation of international law, by seeking to promote the persecution of gay people.

However, the lawsuit was dismissed this week by the United States District Court for the District of Massachusetts, which ruled that there was no jurisdiction for the case….

Though he dismissed the case, the judge took time to specifically condemn Lively’s work.

Click on the link above to read Judge Michael A. Ponsor’s harsh criticisms. The dismissal of course is a disappointing result, but it was always an ambitious case. The struggle against hate continues, including against the export of intolerance by people like Lively.