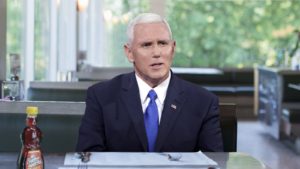 Expressing concerns about the propriety of being left alone with a syrup container of the opposite sex, Vice President Mike Pence reportedly asked his waiter Thursday to remove Mrs. Butterworth from the table until his wife arrived to join him at a local diner. “Excuse me, sir, would you please take this out of my line of sight until my wife gets here?” said Pence, who reportedly attempted to put the table’s sugar dispenser and salt and pepper shakers between him and the feminine syrup bottle before deciding that even having Mrs. Butterworth within arm’s reach could lead him to have impure thoughts. “It just would not be right for me to sit here alone with a woman-shaped container, particularly one as shapely as this. In fact, I would advise you to do the same for the man sitting over there—I see he is sitting very close to Mrs. Butterworth even though he appears to be wearing a wedding ring.” At press time, Pence had asked the waiter to pour syrup on his pancakes for him, as it would be unseemly to handle the curves of the plastic woman in such a public place.