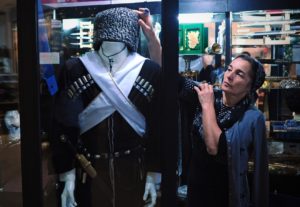 Horrifying news from what might euphemistically be called Russia’s sphere of influence:

First, two television reporters vanished. Then a waiter went missing. Over the past week, men ranging in age from 16 to 50 have disappeared from the streets of Chechnya.

While abuses by security services in the region, where Russia fought a two-decade war against Islamic insurgents, have long been a stain on President Vladimir V. Putin’s human rights record, gay people had not previously been targeted on a wide scale.

The men were detained “in connection with their nontraditional sexual orientation, or suspicion of such,” the newspaper, Novaya Gazeta, reported, citing Russian federal law enforcement officials, who blamed the local authorities.

By Saturday, the paper reported, and an analyst of the region with her own sources confirmed, that more than 100 gay men had been detained. The newspaper had the names of three murder victims, and suspected many others had died in extrajudicial killings.

It is a short step, if any, from wanting gay people invisible to wanting us dead. Indeed, a government spokesman responded to the story by denying that there are any gay people in Chechnya: “You cannot arrest or repress people who just don’t exist in the republic.”