Lambda Legal responds to confirmation of Gorsuch to SCOTUS 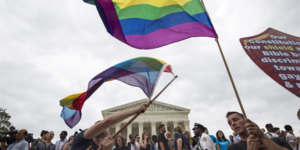 The arc of the moral universe may bend towards justice, but it does not bend itself.

When Judge Gorsuch was nominated in January, many people predicted that he would easily secure the 60 votes necessary for confirmation. We dispelled the #AlternativeFacts being peddled about Judge Gorsuch by working with progressive allies to expose his antigay, anti-trans, anti-woman, anti-choice and anti-worker agenda.

While it is disappointing to have lost this particular fight, there is no longer any real debate over what kind of nominee President Trump put forth. And there is no longer any doubt that, to certain folks in Washington, securing a “political win” was more important than safeguarding the rights of millions of Americans.

So it’s okay to be angry, sad, frustrated and disappointed. I am too. But know this:

Lambda Legal was there. The voice of our community was heard. We made a difference.

And we won’t stop. #WeObject