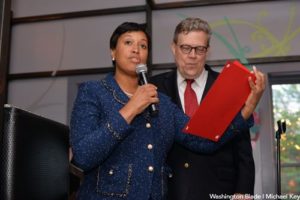 Good evening, and thank you for celebrating with us.

I was very happy on New Year’s Day to hand over the reins of GLAA.

A lot has changed since I showed up in 1979. Many activists and public officials have come and gone. But the greatest change is to expectations. I am occasionally invited to speak to groups of high school students. Last year, I met with the gay-straight alliance at Cardozo High, where my dad went to school when it was the segregated Central High. The possibilities these young people can take for granted — possibilities my generation could not — vindicate all our work.

That work is not over. Yesterday, Rep. Jason Chaffetz, a terrible homophobe and a frequent meddler in D.C. affairs, announced he will not seek re-election. He may resign as soon as tomorrow. Strike up the band! But as Councilmember Allen noted, another representative will take up interfering in District legislation where Chaffetz leaves off.

The past year brought a generational shift at GLAA. Guillaume approached me and we talked about challenges, coalitions, and our legacy. I reached out to John. Craig Howell, another former GLAA president, recruited Nick. Guillaume recruited Bobbi and Pamgrace. Gary stayed on as treasurer. Chris tweaked our logo and beautifully redesigned our website and blog. GLAA now has our most diverse executive committee ever.

Let’s face it, any victory blindness ended on election night. We are woke. To generations gone, generations to come, and those in between, I raise a toast:

Much has been done. Much remains to be done. Here’s to the cause.