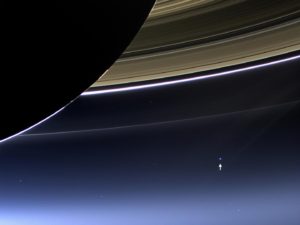 On Saturday morning, the spacecraft, which has been circling Saturn and its environs for the last 13 years, will skim over the hazes of Titan, the ringed planet’s biggest moon. Like a heavy hand, Titan’s gravity will reach out and pull Cassini onto a new path, downward into the narrow gap between Saturn and its innermost ring, where no human artifact has ever gone….

To Cassini will go the credit for discovering what many astronomers think is the most likely place to find evidence of life beyond Earth. That would be Enceladus, which the spacecraft found is shooting plumes of salty water out of cracks in the ice that makes up its surface.

It turns out that Enceladus is mostly water — an “ocean world,” as NASA has now labeled many of the outer solar system moons. And an examination of the plumes recently detected the presence of hydrogen, suggesting there is hydrothermal activity, that is to say, energy and heat on the bottom of that ocean that could provide food for microbes.

On policing the bushes in Malcolm X Park Read More